Holy Cross Priory is different to any other retirement village or care home. Our retirement community is independent and run by the people who work here, directly benefitting the residents. It is secure, peaceful and serene in the picturesque Sussex countryside.

The Priory has had a varied and interesting history. The present core building is a Listed Grade II building built by German Louis Huth to a design by Sir Matthew Digby Wyatt. During the 1930s the house became a hotel hosting weddings, grand banquets and halls. In WWII the house was occupied by ranking officers and the men camped in the grounds. Some of the D-day plans were made here by Sir Winston Churchill, General Eisenhower and Field Marshall Montgomery.

In 1964 the house was bought by the Sisters of Grace and Compassion, a modern order formed by Sister Mary Garson in 1954 which became part of the Benedictine family in 1978. Mary was born in Aberdeenshire, served in the Women's Auxiliary Air Force and worked as an educational psychologist for East Sussex County Council. She retired in 2005 and and died on March 8th 2007. She received the Papal Cross Pro Ecclesia et Pontifice as well as an MBE in recognition of her work for the elderly. The Holy Cross Priory works to carry on the legacy that she left behind. 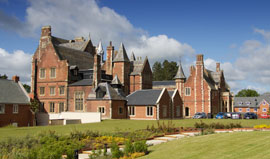 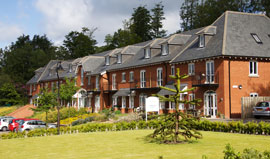